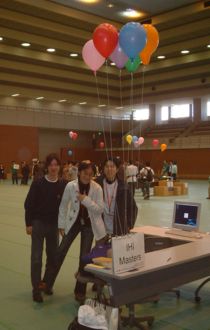 International University Competition Programming contest ICPC is the world's largest programming contest sponsored by the Computer Society ACM each year.We set up a team in pairs and compete for how much and how quickly we can solve the programming challenges given on the spot in time.From the Japan, you can participate in the finals of the World championships after qualifying in Japan and the Asian quarter.

In the counting, the seventh laboratory of Mathematics is held at the center, and a voluntary practice meeting is carried out every year and the challenge is continued.In recent years, the number of participating teams from the University of Tokyo has increased dramatically, and it has become difficult to pass the domestic qualifiers, so we went to the world Championships in the Hachioji tournament in 2005.

To solve the problem, the knowledge of the algorithm theory in various fields and the implementation power are demanded, and it becomes a very good chance to practice what has been learnt by the counting.In addition, exchanges with top-level teams at home and abroad will be very good stimulation.If you are a student who remembers the programming arm, why not come and enjoy the contest together?