IVRC (International Student rivalry Virtual reality contest) has been held since 1993 in a contest of interactive works, with the theme of virtual reality.Only the team that passed the document screening by the proposal and the presentation examination etc. will advance to the final meeting, and actually exhibit the work in front of the general public.As a result, not only the completeness of the work and the ability to implement it, but also the overall strength of the team, such as ideas, planning skills and presentation ability.

In the Department of Computational Engineering, the Student volunteer team "ARIEL" participated in 1999, and has left a number of excellent grades, such as winning the overall championship, or being adopted by the American Association of International Siggraph.In 2011, some of the members involved in the exhibition of the May festival participated in the center and won the Gifu VR Grand Prize (3rd Prize) and the Solid Lei Institute award in the finals held at the Japan Science Miraikan. 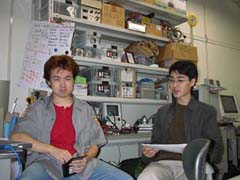 A scene of activity in one day

ARIEL (Artificial Reality and Intelligent Engineering Lovers) is a manufacturing circle composed mainly of undergraduate volunteers of the Department of counting engineering, especially third graders.As a part of our activities, we participate in contests such as IVRC and exhibit works at the May festival held at Hongo Campus every year.

We aim to develop an interactive system.

As well as receiving advice from seniors in various fields, we have also received support in various forms in the laboratory of the Department affiliation.In some individuals, we have used devices that are difficult to obtain.I want to practice what I heard in the class, and want to do something one in undergraduate, I want to recommend to students such a circle.